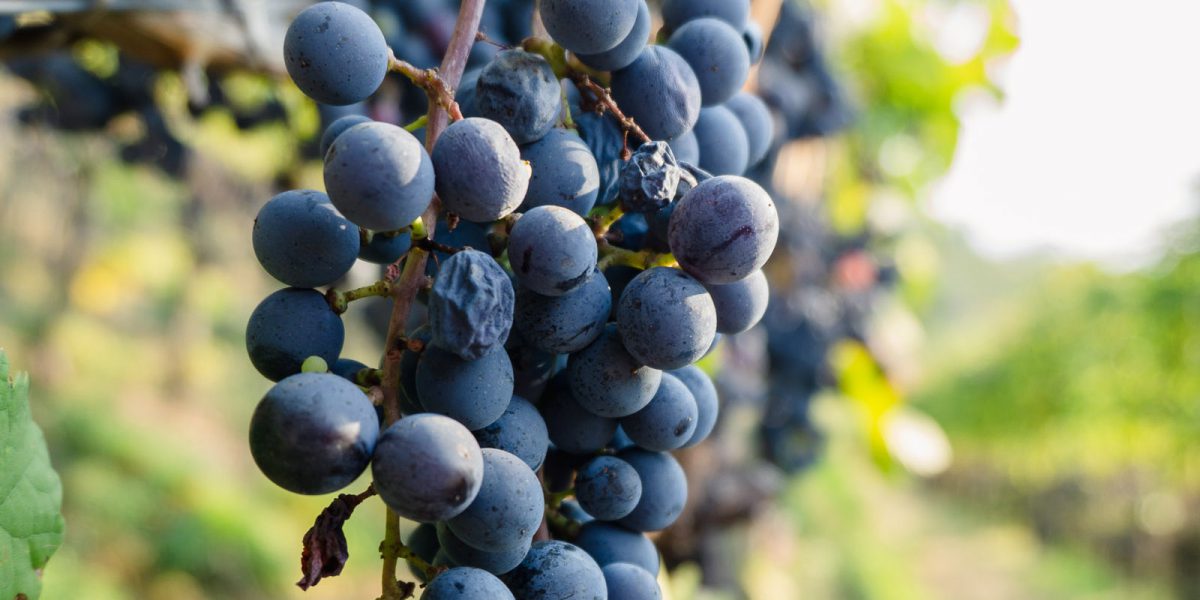 Visiting The Island of Santorini, Greece

SOMMFOUNDATION, with the help of The Wines of Greece, gave a group of sommeliers, restaurant professionals, and wine journalists an opportunity earlier this year to touch the nest of the wine world: On the Greek island of Santorini, adhering to long-held traditions dating back to ancient times means local wines and food continue to be deeply integrated into the lifestyle there.

Incredibly beautiful and romantic, Santorini is a unique locale of volcanic origin. The hidden treasures behind its narrow, cozy streets—with an abundance of small whitewashed houses with blue windows and doors the color of seawater—are the ancient vineyards and dedicated modern wineries, which served as the focal point of this trip.

Dinner at the Skala restaurant in the company of enologist/Greek wine ambassador Sofia Perpera and her family served as the highlight of the arrival evening. Multiple courses of traditional local dishes from Greek salad and grilled octopus to the lesser-known fava me koukia (fava puree) and ntomatokeftedes (tomato fritters) seemed to emerge endlessly from the kitchen. Dozens of regional wines— mainly Assyrtiko, as well as Aidani and Athiri blends—accompanied the meal. We were amazed by the diversity on the table, finding out later in the trip that every new restaurant we tried had a signature item on the menu meant to impress with its originality. 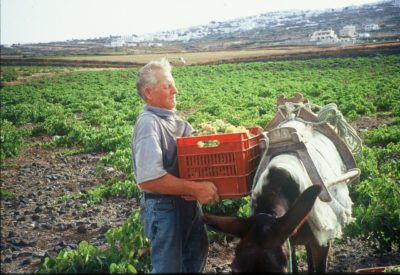 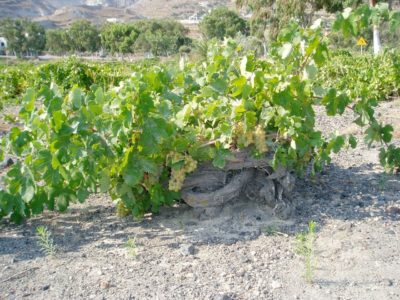 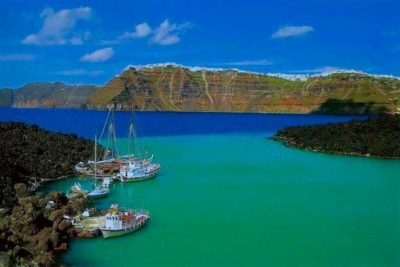 During our week-long visit, we dined in some of the other best restaurants in Santorini, including Feredini, To Psaraki, and Galini Taverna. Our group also visited all 13 commercial wineries on the island. Each wine producer in Santorini has its own approach to innovation while still honoring traditions that shine through its wines. Yiannis Paraskevopoulos of GAIA Wines, for example, is experimenting with deep-sea underwater wine-aging and skin-contact, amphorae-fermented Assyrtiko.

Among Domaine Sigalas’ specialties are its single-village Assyrtiko wines, with seven villages on the island (Oia, Fira, Megalochori, Pyrgos, Imerovigli, Vourvoulos, and Akrotiri) getting representation in its portfolio. Meanwhile, Santo Wines, a cooperative with 1,200 members, carries out the most significant production on the island.

The majority of the wineries make Assyrtiko in a traditional style known as Nykteri, producing wines both luxurious and pronounced. Current rules permit the wine to age in oak barrels for at least three months, and it’s not uncommon for Nykteri wines to be purposely oxidative in style with a minimum ABV of 13.5%.

White-wine production is dominant on the island, with Assyrtiko being a monarch grape. However, the oldest winery in Santorini, Canava Roussos, dedicates a large portion of its vinification efforts to Mandilaria and Mavrathiro reds.

We learned a lot about the island’s wines simply from walking the vineyards, where practices at least 5,000 years old unfold. Pruning in the koulara method is universal here, meaning vines are wrapped into countless circles to form a nest or a basket shape for protection from harsh winds and heat. Koulara vines produce low yields, on average about 1,400–3,500 kilograms/hectare, and demand hand-picking. The absence of clay in the soil gives the vines a natural immunity from phylloxera, allowing them to remain ungrafted while developing sturdy root systems that penetrate several meters into the ground.

The intricacies of the island’s terroir means winemaking continues to thrive under these ancient farming traditions, while the latest technologies are applied whenever possible. That means Santorini wine will continue to meet the highest standards of quality without comprising its ideals for demand from the outside world.