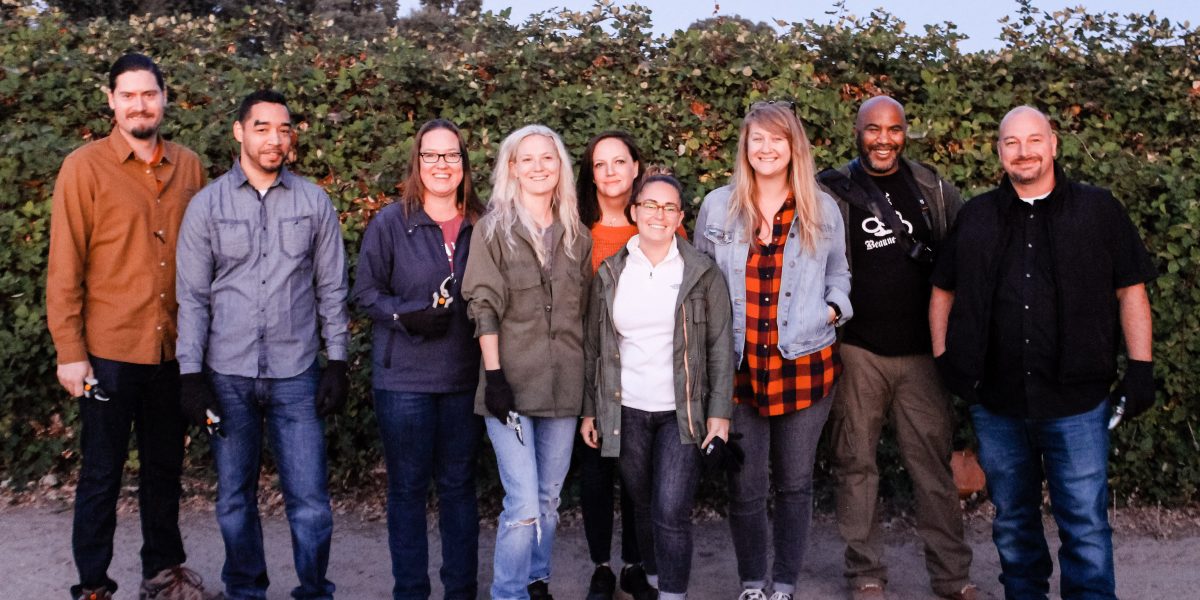 When I found out I was selected to be one of eight sommeliers invited by SommFoundation to experience harvest in Lodi, most of my colleagues’ responses could be summarized by one question: “Why Lodi?” I understood their incredulity. The name conjures big reds with a capital B: fruity bulk wine meant for end-capped case displays. I don’t know what I expected when I arrived, but I know that the actual experience defied anything I
could have imagined. Lodi is considered an “emerging” region, yet it’s home to some of the oldest extant vines in the United States. I started my career as a paleoanthropologist, so thinking about the coevolution of these vines in a changing landscape is fascinating. They’re survivors that have endured Prohibition, negligence, bad weather, and depressed economies, and they’re still standing quite heartily on rootstock the diameter of small palm trees. Older than air conditioning and the automobile, some were already 20-something when the Titanic sank. The product of a hundred years of hard work and land stewardship, many of Lodi’s vineyards have been in the same family for generations. The majority of these winemaking clans are farmers first, taking great care to preserve the land that will be passed down to their descendants. Among them is Jessie’s Grove Vineyards winemaker Greg Burns, who tends the same vines his family has maintained since his great-great-grandfather established a vineyard in 1886 after a failed stake in the California gold rush.

The wines made from the region’s old and gnarled vines are still huge, but there’s an underlying elegance and maturity at their core. Some of the best
examples we tried on our trip were part of the Lodi Native line, a collaborative project focusing on single-vineyard, oldvine Zinfandel produced with minimal intervention; the aging protocols prohibit the use of new oak, and the grapes were farmed under the LODI RULES set of sustainability benchmarks for vineyards. Launched in 2005 after ten years of development, these standards were the nation’s first third-party certification program for sustainable practices and have since served as inspiration for similar programs across the country and around the world. Zinfandel is king in Lodi, but the crown is being contested by a new wave of winemakers exploring grapes outside of the norm. There are over a hundred varieties grown in Lodi, more than 50 of which can be found on a single property (some encompassing just a single row) tended by the Koth family, who have a lengthy record of land stewardship at their vineyard, Mokelumne Glen. Markus Niggli of Markus Wine Co. makes Nativo, a stunning blend of Kerner, Riesling, and Bacchus, from the Koths’ estate.

Other international grapes are heralded throughout the region, including classic white Southern Rhône varieties at Acquiesce and Spanish varieties at Bokisch. During the trip, we gathered at Jessie’s Grove’s Royal Tee Vineyard at dawn to help Greg La Follette and Steve Matthiasson harvest grapes for their 2019 vintages, with Matthiasson’s pick designated for the first Lodi wine in his Matthiasson Wines label. After La Follette blessed the vineyard with a tune on the bagpipes, he turned our attention to the massive Zinfandel, Carignan (pronounced “Kerrigan” by the locals), Mission, Flame Tokay, and Black Prince (aka Rose of Peru) vines that dotted the landscape as he taught us how to tell the difference between them. We also discussed the legacy of sustainability in the region with Matthiasson, which was particularly special considering that, just out of enology school, he coauthored the workbook that eventually led to the creation of LODI RULES. To stand in such a historic vineyard with these titans of wine at daybreak is an experience I’ll never forget.

On our last day in Lodi, we had a restorative breakfast at Bubbles ’n’ Birds— a necessary move after visiting local watering hole Know Place the previous evening. I tried my best not to embarrass Team Texas in a high-stakes game of table shuffleboard against Team NYC (we won, with absolutely zero help from yours truly). After breakfast, we assembled for a roundtable discussion on our impressions of Lodi and our thoughts on how the Lodi Winegrape Commission should proceed in the future. The consensus was that there was a place for Lodi wines in the market, especially on farm-to-table menus, but there currently isn’t the infrastructure, support, and distribution needed to get the word out. The answer to the aforementioned question “Why Lodi?” is increasingly easy to answer. The region has been a well-kept secret in the California wine world, but there’s a new horizon in view for its farming families and innovative winemakers, and it’s an honor to be on the front lines of this movement.

I would be remiss if I didn’t extend a multitude of thanks to the people who made this trip truly exceptional—first and foremost to SommFoundation for making our Lodi dreams a reality. Thank you to Randy Caparoso for somehow juggling triple duty as a tour guide, camp counselor, and seasoned sommelier contributing depth and passion into our exploration of the region’s wines. Finally, thanks to the rest of the team for making sure we didn’t get burnt to a crisp or left in the vineyard; to all of the growers, winemakers, chefs, harvest workers, and vineyard cats for enriching my understanding of Lodi in an indelible way; and, of course, to my fellow trip attendees. Lodi rules