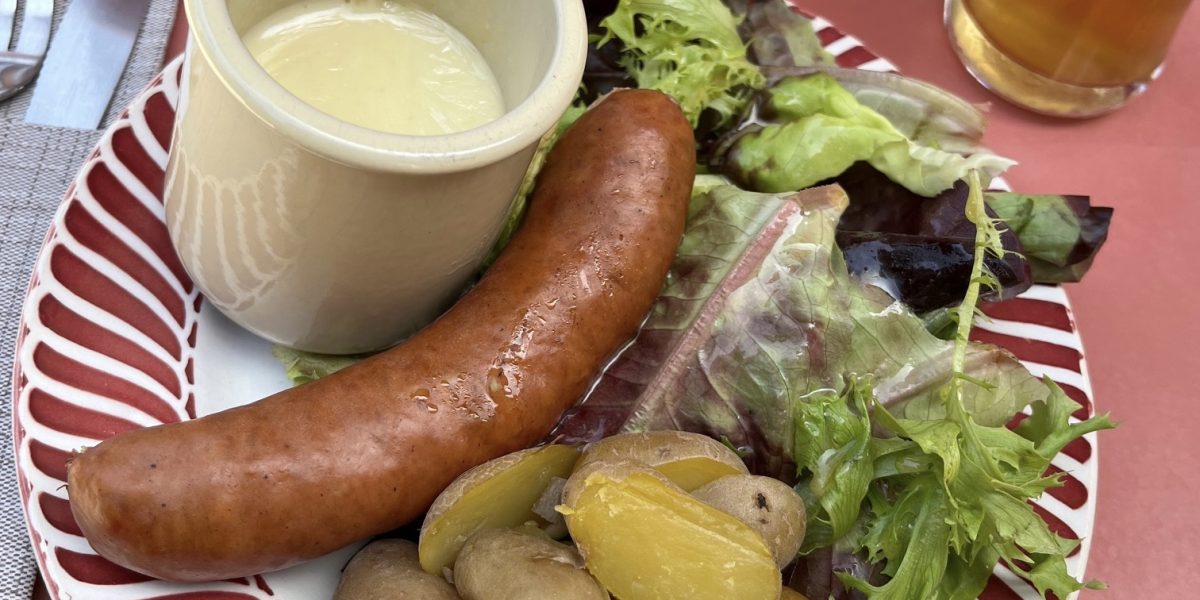 A Week in Burgundy with Bertrand Leulliette, by LeeAnne Arnold

All bangers, all the time.

I never set out to write an article about French sausages, but here I am chronicling the various sausages (saucisse) and salami (saucission sec) from throughout the Burgundy/Jura/Beaujolais regions of Eastern France that I encountered on my Enrichment Trip through Bertrand’s Wines and SommFoundation. When most people think of Burgundy, they usually associate expensive beautiful wines, escargot, roasted chickens, and other gastronomic delicacies. I will forever associate it with the week of sausages. As I write this, I still haven’t eaten a sausage since I have come home, it’s been well over a month and I live pretty close to an amazing butcher, whose sausages I adore. I’m not yet ready. It was a lot of sausage.

Each night we came home after spending hours in incredibly hot vineyards and cool cellars to our home in Beaune. Our brains were reeling from history lessons, vineyard practices, and oak regiments and our palates a bit blown. In true American fashion we filled ourselves on the charcuterie and cheese plates before our actual dinner was ready to be served. Bertrand bought the correct amount of cheese for three American wine professionals. An entire wheel of Epoisses, sizable wedges of Comté, Morbier, Mimolette, and the first gone and always missed Brillat-Savarin. And the trusty side kick, saucisson. Saucisson can do no wrong. It’s the tried and true, consistently delicious, rustic, slightly funky, savory and salty companion that’s down for whatever. Have a little whole grain mustard and some cornichons, it’s there for you. A slice of baguette and époisses, you’re going to have a good time. Honestly, it’s a real banger.

As we enjoyed most of these sausages at the house in Beaune, any of the bottles we enjoyed during apéro hour matched beautifully. Whether it was a 1988 Magnum of Domaine Robin Grand Cru “Les Clos” Chablis, 1996 Boyer-Martenot 1er Cru Meursault-Perrières, or something a little more accessible like 2020 Jean Paul Thévenet “En Voiture Simone” from Régnié. At the end of the day, when I think about my time in Burgundy, it’s all bangers.

Thank you to SommFoundation and Bertrand’s Wines for their sponsorship of this trip for three American sommeliers, “Dive into Bourgogne’s Five Côtes.”

LeeAnne Arnold is the Assistant Wine Director at Audrey in Nashville, Tennessee.